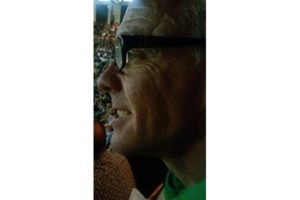 In September of 1994, my childhood friend, whom I knew as Gretchen Hage, came over to my Alki Point beach cabin with her husband Mike Apgar.

Mike held in his hand a 9.6 baud modem, which he proceeded to throw into the back of my 1992 era Windows 3.1 PC. He plugged my telephone line into the modem and typed the mysterious Hayes Modem init string, ATDT*70, that brought the two to life ‘….sqeeeek, sqawwwwwk, sqwaaach, bleeep bloop…’ then, like magic, words from cyberspace — his ISP was actually named ‘cyberspace’ — shows up on my monitor. Mike then logs into a Unix shell account and shows me PINE (e-mail!), Usenet (uu encoded content!), TIN (text based world wide web!), IRC (chat!), and Archie & Gopher (access to big research libraries!).

I thought all of this was cool and got a little tingly feeling thinking about this thing that was designed to connect all the smartest people in the world, already being misappropriated by brilliant artists, activists and anarchists.

Mike spoke heady and animated about this being a revolution and pushing the populist opinion, that it was too important to only be in the hands of research institutions and rich hobbyists locked in their basements. He wanted to bring the Internet to the masses….street level Internet access. ‘What kind of business do you open in revolutionary times?’ Mike asked. The answer is a cafe, of course — invoking the pre-revolutionary French cafe scene.

He was proposing something that never existed before. A democratic Internet, where anyone could have access to this precious resource. Internet by the slice. No commitment, $10/month. I said it sounded amazing. He said they had the name, the Speakeasy, and their eye on a piece of property that provided a lot of cheap square footage. He was also assembling a team — I called it a Swiss Army Knife — of people to tackle all the necessary tasks of opening the cafe. It was a lot of fun back then. Like Spanky and Our Gang, ‘come on fellas let’s put on a show!’