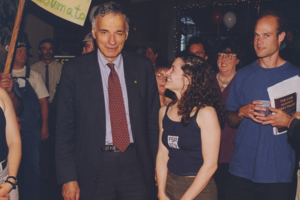 Green Party presidential candidate Ralph Nader will use a visit to Seattle tomorrow to try to woo labor rank and file away from their unions’ endorsements of Vice President Al Gore, give a hand to his favorite local candidate and raise some money for himself.

“How many years of dissembling and lies and betrayals do the Democrats have to deliver to organized labor before labor says `enough is enough’?” Nader asked in an interview from Sacramento yesterday.

He has the answer, too. “As long as the Republicans are worse than the Democrats. And that’s a pretty unfortunate way to decide who to vote for,” he said.

But that’s what the nation’s best-known consumer advocate faces in his third-party campaign for president. Democrats call him a spoiler who could ensure a victory for Republican George W. Bush by pulling even a small percentage of votes from Gore.

How does Nader convince people that a vote for him isn’t wasted, even if polls say he has no chance of winning?

“You show them in many ways how they waste their vote when they support one of two parties that are wasting our democracy,” he said. “They are just legitimizing what they are criticizing.”

After four days campaigning in California, Nader arrives in Portland today and comes to Seattle for a one-day stop tomorrow morning.

While Nader will appear here with other Green Party candidates, he said he also wants to help out a Democrat. He said he will endorse Insurance Commissioner Deborah Senn in her Democratic Senate primary race against former Congresswoman Maria Cantwell.

“She’s been a terrific insurance commissioner,” said Nader. “I’ve been following her. I read her news releases.”

In the interview, Nader also:

Called for a moratorium on federal land exchanges. The swaps have been criticized by environmentalists and government investigators for favoring private interests over the public’s.

“Our government doesn’t have good negotiators as trustees of the federal land,” Nader said. “They have been hornswoggled, or tricked or intimidated by powerful political interests.”

Defended the Makah tribe’s treaty right to hunt whales. His vice-presidential running mate, Winona LaDuke, has been attacked by some anti-whaling activists in the Green Party for her support for Makah whaling.

“That’s part of the treaty rights, it’s part of the whaling commission rules . . . and it’s part of their traditional subsistence practices,” Nader said. “I think I’m going to try to persuade the environmentalists to go after the big whale hunters who are using it for commercial purposes,” such as Japan and Norway.

Said that in addition to states where he has a following, such as the western states on this week’s swing, he will focus his campaign on states where Gore is given little chance for victory. In places such as Texas, Virginia and Oklahoma, he said, Democrats may not be swayed by arguments that a vote for Nader would help Bush since, “Gore is already a goner.”

Nader will give a speech at the Seattle Labor Temple at 2 p.m. tomorrow. Afterward he will meet with a small group of labor leaders.

Most major labor organizations have endorsed Gore, nationally and locally, including the Washington State Labor Council.

The labor council ended its convention yesterday with no dissension about its April endorsement of Gore, said spokeswoman Karen Keiser.

“I have to tell you nobody even brought up Nader. Not even a rumbling,” she said.

Keiser concedes that Nader’s opposition to the North American Free Trade Agreement and the World Trade Organization are popular positions with many union people. But she said union members are satisfied with their organizations’ support for Gore. “Everybody who doesn’t get labor’s endorsement says the leaders are out of touch with the rank and file,” she said.

Among the labor leaders invited to meet with Nader tomorrow are at least one who supports his candidacy and others who might personally, even if they won’t publicly, endorse him.

“At the last labor council meeting here I saw folks on executive boards of their locals wearing Nader pins,” said Paul Bigman, a labor activist who helped organize the meeting as a member of the Labor Party Seattle Chapter, not as a Nader backer. “There is some support here.”

Nader will also hold a fund-raiser at the Speakeasy Cafe at 6 p.m. and give a speech at the Moore Theatre at 7:30 p.m.