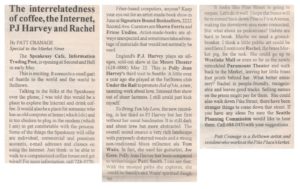 One day in early April of 1995, I was walking from where I worked at the Newsstand in the Pike Place Market to our apartment at 4th and Wall in Belltown. On the way, there was a sign on a door of a building at 2nd and Bell about a Speakeasy, and there were activities and construction inside. I took down the phone number to call when I got home. (You see I wrote for the Market News back then and that gave me the right credentials to be snoopy.) I talked to a man whose voice I later recognized as Chris Osburn and was told that, among other things, it would be a place to explore the Internet and drink coffee. Wow, I thought, suddenly my computer would be able burst outside the wall of my apartment and into the rest of the world, wired in all directions.

When the Speakeasy opened, I got a Rain Mail account and started playing with the dumb terminals around the cafe. I caught on quickly and helped some of my new friends. Tyler Apgar, one of the owners, said I should put in a resume to work there. I thought OK, but all I had was my art resume so I sent that. My cover letter may have mentioned something about knowing the secret to the Bleeding Icon. 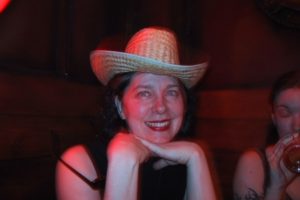 One day, Tyler made me my first webpage from my bookmarked websites. It was a random Internet list of nothings — in no order and of no importance — and they were now live!!! My goodness, I had to find the code and figure out what did what and how to put it in some kind of order. It took going back and forth from the Pico program on the dumb terminals to the floor computers to see if the new code and colors worked. This went on all afternoon, but finally the site was done (even though websites are never done.)

My first site was a top 10 list called ‘Hypnotizing Chickens: Stuck on a planet like a chicken on a chalk line.’  The title was borrowed from something my husband Tom wrote, and the background color was #7FFF00. I had no fear creating my first website; I had gotten over any of that earlier when Doug Brick, the SysAdmin, came over and asked if I needed help — possibly because of my puzzled look and my hands raised motionless in the air, a foot over my keyboard. I said, ‘I can’t blow anything up anywhere with the wrong keystroke, can I?’ He proceed to hit every random key on the dumb terminal, then with one key command made it all as it was and said, ‘No, you won’t blow anything up … but I can.’