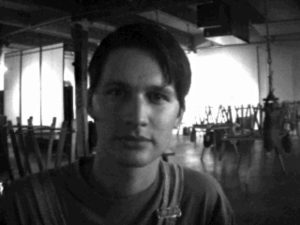 The day my girlfriend left for school back east, a friend took me out to cheer me up. He brought me to the Speakeasy Cafe to show me ‘The Internet.’ This couldn’t have been long after the cafe first opened.

The only thing I remember about his Internet tour was him telneting to his college servers and messing up other students’ projects. It was fascinating.

That same night, I bought O’Reilly’s ‘Whole Internet Guide and Catalog’ at Twice Sold Tales on Capitol Hill. This is back when they still put lists of websites in books to make them easier to find, and I read it in a day.

The next day I went back and signed up for a $10 membership. At this point my only computer experience was a Commodore 64 that I played video games on when I was 12. I didn’t have anyone to email and didn’t like IRC, so when I would come in around noon every day before my swing shift job, I spent the whole time just reading and learning how it all worked.

At some point a couple months into this, Gretchen just asked me if I wanted a job [Ed. Note – ‘I asked him more than once. Mike, Tyler and I all agreed we should get him to work at Speakeasy — and we did.’ – Gretchen Apgar]. I almost didn’t take it because it was like $1.25/hr less than I was making at the AM/PM on 85th and Aurora. 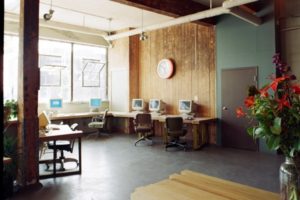 I worked ‘Netdesk.’ This involved signing people up for accounts, helping them with email and miscellaneous technical issues, signing people on and off hourly Xterminals or other computers. I also got to try my hand at some really bad web design.

Occasionally, I pulled a good espresso and did a bad job mopping up at closing.

After a while this turned into a technician position where, in addition to general computer operator stuff, I went out to business customers’ sites and set up office file/print servers and networks. I was able to learn Linux and the basics of internet systems administration, which was such a new thing at the time. The skills were invaluable.

When I started, they just had Eve, a SPARC 20 running SunOS 4.1.4, a couple PCs running Windows 3.1 with Trumpet winsock, a Mac, 4 NCD Xterminals and a bunch of WYSE 80 dumb terminals. There was a Livingston Portmaster that the dumb terms all connected to, which also had some 14.4 modems which a lucky few could dial in on. There were also a few ‘friends of the family’ servers housed on desks and shelves, all right next to the kitchen in the cafe. I remember when they got the PRI and a USRobotics TotalControls with 56k dial-up and ISDN and we were on our way to becoming an ISP.