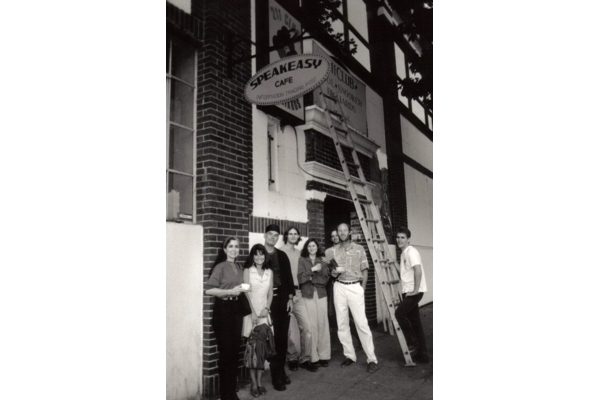 After months of wielding jackhammers, running cable, wrangling 2 x 4’s into actual furniture and eating far too many PB & J sandwiches, it was finally time to open the cafe.

Coffee And A Few Bytes — Internet Cafes Serve Up New Ways To Get Wired, Blending Technology, Community And Entertainment

Seattle’s Speakeasy Cafe wants the best of both worlds – physical and virtual.

In the realm of the former, the new 5,500-square-foot gathering spot will open Friday in a converted Belltown storage warehouse at 2304 Second Ave., across from Mama’s Mexican Kitchen. As for the latter, the cafe will sport more than a dozen computers with instant Internet access, including links to Speakeasy’s own World Wide Web site.

If every revolution, even a digital one, needs a cafe, Speakeasy has just the thing: concrete ceilings with exposed beams, hardwood tables, films, readings, live music and theater. And no shortage of cracked ceramic cups bearing grainy brown sludge. You could be in turn-of-the-century Austria, Paris in the ’20s or a ’60s coffeehouse, if it weren’t for those big flickering screens scattered about.

Speakeasy’s founders, a loose-hanging crew resembling a hip-hop band between gigs more than an entrepreneurial startup, call their new enterprise an “information trading post.” So we’ve got the Wild West thrown in along with evocations of Prohibition, bohemia and Seattle’s reputation for latte supremacy – all permeated by mind tools of the digital age to come.

In a corner corral and scattered about on counters are Internet terminals. At the espresso counter are a laser printer and scanner. Here the fastest draw refers not only to the espresso machine but monitor screen refreshes, and X is not just a Generation but a type of display terminal.

This is the Internet as it is meant to be – fast, animated, interactive, a blend of PC and TV with an attitude. A high-speed T-1 phone line enables photographs and video to be shown at rates that will spoil typical home or business Internet users. For straight e-mail or text access there are Boeing surplus VT100 terminals.

Speakeasy, open from 7 a.m. to 2 a.m. daily, is the latest incarnation of the Internet cafe, a recent and still-unproved genre blending high tech with high slack. Only two or three dozen exist worldwide, including one other Seattle outlet – the Internet Cafe at Seattle Espresso Co., 528 15th Ave. E. on Capitol Hill.

The standard approach has been to offer a couple of desktop computers connected via a conventional phone line to the World Wide Web, the organized, graphics-heavy portion of the Internet. You pay a buck or two for 10 to 20 minutes of access, and it’s a good way to get introduced to the Internet, and maybe the redhead at the next terminal as well.

Speakeasy wants to take things, including that latter part, to the next level.

The X-terminals make the cafe a draw for people who know and really use the Net. Not only are they plugged into the cool sites, they’re a great resource for newbies and casual Netheads. Get a cybernaut going on an X terminal and pretty soon there’s a crowd, learning things, trading tips, walking the walk.

“You’ll see people gathered around, getting excited,” said Sam Foucault, press coordinator. “We want people using the Net out in a public space, so they can really interact.”

As for cyberspace, Speakeasy’s Web site, called WWW Speakeasy wURLd (the URL is a play on Uniform Resource Locator, an addressing protocol for the World Wide Web), enables clients to “homestead” their own sites on a virtual island called Freedonia. In a merger of cyberspace and actual space, those Speakeasy Netheads gathered around an X-terminal downtown will be able to meet in Freedonia as well – from home, from school, or wherever they have real lives.

If a community – actual or virtual – emerges from all this, so much the better. The next Seinfeld-style sitcom could well involve a bunch of people who meet over the Net and then get together in their real lives, oscillating between electronic and personal contacts.

“We hope everybody will come in – literally,” said Lou Torregrossa, Speakeasy’s corporate secretary. And virtually, someone else added. You won’t have to log on to enjoy the Speakeasy, its founders say, nor will you have to order a double mocha latte to derive full benefit from the Web.

To log on at the Speakeasy, you can pay a flat rate of $6 an hour for full Internet access or $10 a month for an e-mail account (you’re limited to using Speakeasy’s computers for this option).

You also can join Speakeasy’s network, giving you full Internet access from your own computer. Individuals pay $20 a month and get an e-mail address, their own home page, including five hyperlinks and a graphic or sound file, and discounts on high-speed access at the cafe ($4 an hour instead of $6). Commercial accounts go for $50 a month (plus a $100 setup fee). A premium account costs $200 to set up and $100 a month for access. Escalating fees are charged for additional Web pages, links and audiovisual files.

Speakeasy also offers what it calls Internet in a Burlap Sack for $14.95. Included are all the programs a Mac or PC user needs to log on using his or her own computer.

The Speakeasy wants to expand its presence to bookstores, hotels, office centers, apartment houses, airports, homes, schools and special events. It offers its own RAIN (Remote Access Internet Node) machines, configurable to client specifications. High-speed access, server capabilities, custom interfaces and a direct link to the Speakeasy Network are among the benefits of going with its technology.

Hart Brewery & Pub in Pioneer Square will have the first RAIN machine. Speakeasy’s founders will not say who else they are in “serious” talks with, but potential sites include familiar booksellers and gathering spots in the city.

Who are these guys? Speakeasy’s crew breezily acknowledges a departure from the usual MBA crowd. Most have “kicked around” at a number of odd jobs. They know each other as friends or friends of friends. The mix includes an attorney, designer, architect and performance artist as well as programmers.

Average age: 28. Their capitalization is blithely referred to as “self-funded.” Seven of the principals pooled savings, then hustled up “matching” loans for a total of around $100,000. Owners retain 57 percent equity.

In an apt summarization of Speakeasy’s style, president Mike Apgar temporarily shed his grunge togs for a sport coat and wool pants two weeks ago to visit a Columbia Tower corporation interested in networking offices around the globe. After the meeting he and his associates had trouble coming up with enough money to get them out of the parking garage.

Nonetheless, Speakeasy has big ambitions. “We want to be the Kinko’s of the Internet,” said Apgar. “No one foresaw such a need for photocopying that could support all-night shops every four blocks.”

Speakeasy does have a mission statement, dated New Year’s Day and stating in part: “The idea of computers in a cafe is one possible answer to increasingly pressing questions: How to provide the general public access to the methods of communication and volumes of information now available on the Internet, at a cost they can afford and in such a way that they aren’t socially, economically or politically isolated.”

Its address: http://speakeasy.org. The “org” (for organization) suffix was obtained partly because the more common “com” (for company) designation for “Speakeasy” was already taken, and partly because the cafe’s community-oriented goals are similar to those of a non-profit “org,” Apgar said.

Check it out. As one enthusiastic early supporter put it to the Speakeasy gang, “You’ve gotta get Al Gore in here. This is just what he’s been talking about!”