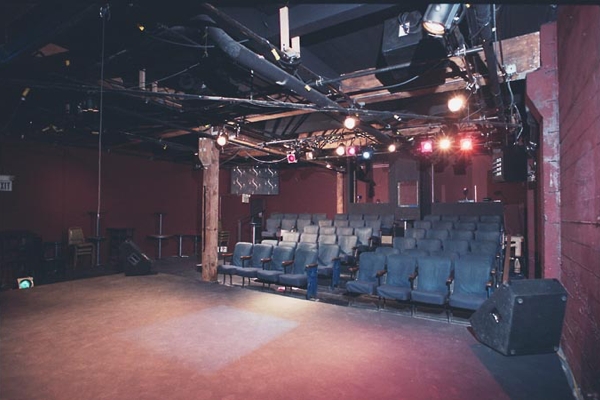 As Seattle’s Belltown neighborhood begins to be revitalized, Speakeasy’s backroom theater is one of a new style of performance spaces.

Sit & Spin is already well-known as a Seattle restaurant, latte parlor and Laundromat all rolled into one.

And now you can also see a play there.

The play, “1942,” is an experimental work devised by University of Washington drama professor Robyn Hunt and a band of her current and former students.

And its presentation in the back room of a hip Belltown hangout where people usually come to wash their black jeans, sip their espressos and smoke their cigarettes reflects an intriguing Seattle trend: the emergence of new performance spaces in establishments not initially designed as theaters.

“Sit & Spin is a place a lot of hip young people frequent, and we thought those same hip young people would like to see some imaginative theater,” says Scott Perret, a cast member of “1942” and one of the show’s producers.

Adds co-producer and fellow actor Lisa Bonney, who also helped create Sit & Spin: “We like the idea of bringing theater to a place where people go anyway, for lots of other reasons.”

Bonney is not alone in that mission. The new Pine Street wine bar Kid Mohair just initiated its own performing venue, with a spoofy musical titled “The S’Wunnerful Horrible Life of Lawrence Welk.” Last year, a group of Seattle actors put on a popular production of Pierre Marivaux’s comedy “Slave Island” in a corner of the Pink Door restaurant, near Pike Place Market.

Staging her new collaborative performance piece “The Approach to the New World” as the first show offered by the Speakeasy Cafe, a Belltown boite featuring high-speed Internet access on some of its countertops and tables, pleases director Susan Fenichell mightily.

“This show is about man’s relationship to technology, so doing it here was too ironic to pass up,” explains Fenichell, a former resident director at Intiman Theatre.

“And I love that the Speakeasy calls itself an `information trading post.’ I’m fond of the idea that we can take theater out of sacred ground, and make it more integral to where people naturally congregate and exchange information.”

Mike Apgar, one of the Speakeasy’s seven owners, imagines fertile crossovers between the new performing area at the cafe and the other aspects of the business.

“Our goal is to actually integrate some of the Internet technology, when it is complementary, with the performances we have,” he notes.

Though their opening at about the same time is coincidental, the new entertainment venues at Kid Mohair, the Speakeasy, and Sit & Spin share some commonalities.

All have been designed as technically well-equipped but intimate and casual environments, where patrons can enjoy refreshments while taking in a performance.

Co-owner Kris von Oy points out that Kid Mohair boasts all the comforts of a cozy nightclub, with its mohair banquettes, velvet curtains and cherry dance floor, as well as its portable stage.

To get to the new performance space in Sit & Spin, you have to walk through the main cafe into a back room that was once a parking garage. Now it has a stage, lighting and a sound system – as well as the purple walls, old couches and dinette sets, kitschy gewgaws and ceiling parachutes one might expect in an elaborate ’60s hippie pad.

But there is also a bar in the room, serving beer on tap and snacks. And unlike any formal playhouse in town, a smoking section has been provided for those who want to puff while they watch and listen. “We want this to feel like a comfortable lounge more than a regular theater,” says Bonney.

The Speakeasy eventually will offer concessions in its new 50-seat stage area, too.

Another shared element is a commitment to eclectic programming – with an emphasis on the offbeat and cutting edge.

In the sophisticated ’20s ambience of Kid Mohair, Von Oy envisions jazz musicians appearing occasionally. And performers in shows at the nearby Paramount Theatre and soon-to-be-constructed A Contemporary Theatre (in the old Eagles Auditorium) could drop by to do after-hours acts.

The inclusion of scripted theater in such enterprises emphasizes the continuing proliferation of live drama throughout Seattle. And the continuing migration here of young actors from around the country, eager to make theater more accessible – and affordable, with ticket prices under $10 – to their peers.

“We want to draw a crowd of people who wouldn’t necessarily go to a theater, but would come to the Sit & Spin – you know, the grunge crowd,” says Perret. “Or the ex-grunge crowd, now that grunge is out.”

It’s an added plus, perhaps, to get several needs of the body and soul met in one spot – and only have to park your car once.

“It makes perfect sense,” contends Fenichell, a Speakeasy habitue. “We Seattleites love good food, good coffee, good conversation. If you can get all that, plus an interesting cultural experience, right in the same building, why not?”