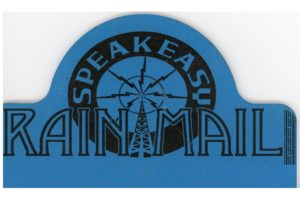 I had always been a super-fan, lived in Ballard, came to Belltown all the time, used the terminals, very tech-savvy and tech-happy.

I was on the board of the Foundry, the Speakeasy’s non-profit arm, in late 1997 and helped do some tech do-gooder stuff. I had a library school degree but didn’t want to work in libraries, really wanted to do computers.

Talked myself into a part-time gig doing afternoon/evening support a few years later. The best part of this was that when I bought a place in Vermont I could take this job with me, so I telecommuted, back in the 90’s, using a dial-up account, and did email from there, IMing with Covad and the people back at the office.

I basically did support email for a year from 1999 I think to the very beginning of 2001, even though I hung out there and with people there for a lot longer. Thanks to blogging I can nail this down pretty well and even have my resignation letter online!

As Speakeasy got big and everyone was talking about how everything would have to scale 100X I figured it wasn’t the place for me though I kept my account there until MegaPath finally phased out the domain entirely.