Speakeasy was conceived around March of 1994. The main impetus was that while the Internet was fascinating to me, I found the necessity of access only at home to be both socially debilitating and much too slow.

I interviewed Mike Apgar, owner of the Speakeasy Café in Seattle, by e-mail on July 15. I not only got answers from Mike but also from Chris Osburn, Speakeasy Network Administrator. Mr. Apgar has a varied history of work in computers as a programmer and analyst. He started Speakeasy with a team of people including an architect, a designer, an attorney, a systems administrator, a playwright and a business executive (his dad).

Margie: Let’s start with a few questions about Speakeasy. What factors convinced you to open a cybercafe?

Mike: Speakeasy was conceived around March of 1994. The main impetus was that while the Internet was fascinating to me, I found the necessity of access only at home to be both socially debilitating and much too slow.

One evening a friend was visiting me, and he needed to find some specific information about a health topic for a play he was writing. We had a great time searching the Web and discovered that the Web can be a lot more fun when you’re browsing it with other people.

One day, not more than a week later, I heard an interview with William Gibson in which he mentioned SFNet (the network of public access, “local-net” at the time) terminals.

I thought of creating a café at that very moment—one that would be a café as you usually think of one: a casual place to have a cup of coffee, not necessarily “computer-centric”.

My wife Gretchen and I talked about it that evening and decided on the name “speakeasy”—we loved the double entendre and had always held a certain fascination for the old speakeasies of the prohibition era. 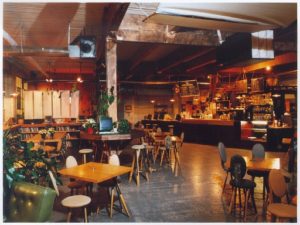 We knew that it would be about people connecting but had no idea what a success it would be, only that we would run a “nice little café” and “do our own thing”.

Later, months before opening, we got more ambitious — please see our mission statement.

Margie: When did you open? your location? 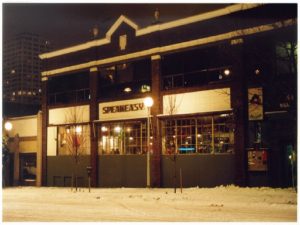 Margie: What is your repeat customer percentage? How big is your regular clientele?

Mike: Our repeat customer rate is very high, though I don’t have a specific percentage. We probably have around 800-1000 very regular customers—meaning at least once a week.

We believe there is a natural tendency for people to form a community in order to trade ideas, tips, secrets, hints and simply communicate about collective situations. Internet computer technology is a powerful tool that helps create such a community. This very thing has happened twice before in this century: first with radio, next with television. As we live in an ever more pressing age for people to communicate and resolve, reason and understand one another, our efforts are designed to facilitate that information exchange.

Margie: Do you get a pretty varied clientele? Any particular age group or profession that come more than others?

Mike: It seems to be weighted in a couple of directions—twenties mostly, with a large number of people “in multi-media fields” as well as people in computers and the arts in general. Another large part of our customer base is more of the thirties and forties crowd that are professional and often net-savvy.

In general, our service appeals to people of all ages. For example, the virtual tours we hold on a regular basis have wide appeal to people who do not associate themselves with the computer age. These classes and special events showcase and educate users on specific opportunities on-line and examine the current and potential roles for technology in our communities. 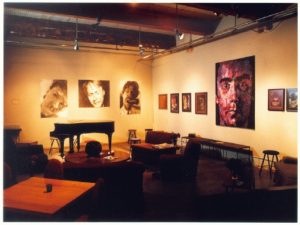 The café is a place for people to gather at any hour. People stop in before work to get their espresso. While waiting, they read news from around the world, send e-mail to a friend across the country or post an article to the local Speakeasy newspapers, electronic magazines or classified advertisements. After work they drop by to read through personal ads, send a bit of electronic mail to the mayor or vote on future Speakeasy events.

Also, in the evenings we draw a large variety of customers, young and old, for our entertainment: the art gallery, live music, poetry readings, film or readings—most happen once a week. The Art Gallery, curated by Tina LaPadula, rotates a new show every 6 weeks.

Margie: How many computers do you have?

Margie: How do you charge for computer time? If you have a monthly membership rate, how many people take you up on it?

Mike: Our graphical terminals are anywhere from $6-10 per hour, depending on whether you are a Speakeasy member. The PCs and Macs have a higher hourly rate.

Members can buy “bulk-time” and get rates as low as $3.50/hour. Monthly membership is $10/month, $50/6 months or $90 for a year and includes an e-mail account (mike@speakeasy.org), 10MB of disk space for non-commercial web pages or simply file storage, free use of our text-only terminals and access at all RAIN sites (Remote Access Internet Nodes). For more details on RAIN, see our web site at http://www.speakeasy.org/rain/.

Margie: What kind of services do you offer? I hear the Pacific Northwest Ballet has a web page set up through you.

We provide some or all of the above services to over 300 commercial clients/organizations including: The Seattle Symphony, Virginia Mason, Pyramid Brewery, The Seattle Opera, Washington CEO/Fivash Publishing, Media Index/Media-Inc, KeyStaff, LifeSpan BioSciences, Sonus Pharmaceuticals, Bumbershoot, AT&T Summer Nights, AT&T Family Fourth, Puget Sound Community School and many many more—our full client list is available at http://www.speakeasy.org/speakeasy/clients/.

Margie: I understand you are using the Linux operating system. How are you using it and why did you choose it?

Chris: We currently have four Linux servers in the café. We use them for internal routing, Usenet and WWW service. We are using a couple as X workstations—one runs SAMBA to serve files to the inevitable Windows PCs. We chose Linux because of its price and its reputation for stability.

One exciting application is the RAIN sites, mentioned earlier. RAIN sites are terminals we’ve placed in other coffee shops and public locations around Seattle. At RAIN sites with more than one terminal, we’ve placed a small 386 with a multiport serial card to act as a terminal server. Over time, we’ve actually gotten everything we need to fit on one floppy, eliminating the need for a hard drive. The whole OS and necessary services run on a RAM disk.

We typically specify Linux when setting up mail servers and firewalls for clients, mainly to ease remote maintenance of these resources.

And in the café, our developers are so CPU-hungry that NT may as well be “Not There”.

Margie: Give us the details of how you have the system configured. Are you using the Apache web server?

Chris: We generally start with Slackware, though we’ve been using Red Hat as well. We do use Apache for our web servers. Again, the price is right, and we can modify the server for our own needs.

Margie: Does Linux work well for you? How do you compare it to other operating systems that you have used?

Chris: I find Linux easy to install, fast in execution, and very well supported. (I may be biased—I learned Unix well before Microsoft got the DOS contract. As far as I’m concerned, they’ve been playing catch-up ever since.) The operating system is extremely stable. One system, primarily used as a development machine, but also serving as an internal router, web server and development box, has been up 160 days as I write this. We’ve actually been putting off hardware upgrades, waiting for it to crash.

Margie: Do you feel cybercafés are here to stay or will they go the way of other fads?

Mike: Public Internet Access is definitely here to stay. Many “cybercafés” (we don’t describe ourselves that way, by the way) are trying to build a business on the novelty of high-speed Internet access or just plain Internet access in a cafe, and there is no more of a certain future in that approach than in any other restaurant/café business, I’m afraid—probably even less.

From the beginning, we planned for the long-term. I think the variety of services we offer, and the atmosphere of the café describes that well. It seems to have worked for us; we’re beginning our third year in business and are growing very fast.

Margie: What role do you think Linux will play in the future of cybercafes?

Chris: I don’t know about a role for Linux in cybercafés in general—however, I can speak for our business. Linux continues to play an ever larger role in everything we do. Look for us to bring Linux forward as a part of our advertising and marketing efforts. It’s very fast, very stable and growing in sophistication many times faster than other versions of Unix and certainly has more to offer at this point than other popular operating systems.