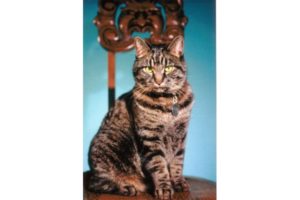 One rainy evening in the largely industrial neighborhood of Georgetown, Speakeasy crew member Jason Jensen found himself being carefully stalked by a rather brazen kitten. After she followed him for several blocks, he took her in, with the intention of finding a home for her.

He brought her into the cafe the next day, and she quickly became the Speakeasy’s totem and mascot. For the next year, she lived in the network offices, holding court amongst the growing gaggle of geeks who were being quickly drafted to staff the phones in order to support Speakeasy’s expanding national broadband business. She even inspired the name of the internal company knowledge-base: Ask Lynx.

As the company grew, however, her furry ways couldn’t be tolerated by some. So Mike and Gretchen Apgar took her home with them, where she lived like the queen she was for the next few years.