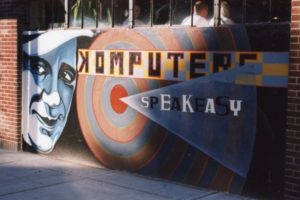 In late November, several of Speakeasy’s web servers were compromised by a hacker based in Russia. After he’d found an exploit, he hijacked the root account on these servers, and then sent a message out to anyone on the server, letting them know what he’d done.

Speakeasy’s first official employee, Maxfield Chandler, engaged with the hacker via IRC, trying to get as much information from him as possible. He and Mike Apgar carefully guided the conversation, during which the hacker demanded payment and a job before revealing the security exploit that he had found.

After refusing to do so, the conversation ended, only to be re-initiated again by the end of that year. The hacker had engaged in several similar hacks on other ISPs around the US, and was quite brazen in his claims that there was no way that he could be prosecuted, given that he was located in Russia.

Speakeasy had originally reported the hack to the authorities, and in spring of that following year, they engaged in a well-choreographed sting that resulted in the successful capture and prosecution of the hacker in question, Alexey Ivanov. This precedent-setting case resulted in new law centered on prosecuting computer crimes originating outside of the US.