Long before Mike Daisey’s perspective and ethics were a topic of discussion, he made a name for himself in a one-man show entitled 21 Dog Years, chronicling his three years as an early employee of Amazon, primarily during the dot-com boom/bust.

While the show eventually moved to New York for an extended run, was adapted into a book and even aired on BBC in audio format, it made its debut in Speakeasy’s Backroom theater. 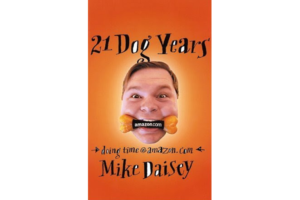 Talk about timing. Just as Seattle writer-actor Mike Daisey was about to debut his latest solo show, the news hit: Amazon.com, the major online retailer, will lay off 15 percent of its staff.

That’s bad news for 1,300 pink-slipped Amazon.com workers, 850 of them in Seattle. But it has spiked interest in “21 Dog Years: Doing Time @ Amazon.com,” Daisey’s monologue about his two intense years as an “Amazonian.”

The show, which opens tomorrow, is a comic exposé of life in the digital trenches and a riff on broken idealism.

“It’s really about me, about realizing I was never going to be rewarded for a life in the arts, and finding I could get a lot more social respect for doing something else,” Daisey explains. “It’s about how I got seduced, dropped out, and how it took me six months to de-program from this incredibly intense corporate culture.”

In 1998 Daisey, a Maine transplant, was a scuffling 25-year old theater artist trying to launch a new sketch comedy group, Up in Your Grill: “I was tired of temping and wanted health insurance, so I decided to try a job at Amazon. And boy, did I get sucked in.”

Working first in customer service, then business development, he saw “Amazon from both ends – the worker drone area, and the lofty heights of hype.”

At first, Daisey “bought the `work hard, play hard, make history’ dream. I thought we would change the world. But as Amazon grew it became just another place selling things, another store.”

Before reaching that epiphany, Daisey willingly worked “ludicrous” hours alongside his co-workers, all under the thrall of “our incredibly charismatic leader,” Amazon.com founder Jeff Bezos. “It was like a cult – we lived, worked, and breathed Amazon.”

Daisey’s partly-improvised show quotes from letters he wrote (but didn’t send) to Bezos. “Some read like teen confessional fan mail. It’s embarrassing, but you can’t do a good one-man show without a little embarrassment.”

Ultimately, Daisey says his Amazon-worship gave way to disillusion. “As we grew from 500 people to 6,000, the culture was drastically altered and just boiled down to buzz-words. I also noticed I was getting more conservative, changing in ways I didn’t like.”

With ambivalence, Daisey left Amazon last year to appear on TV’s “The John Report with Bob.”

But he has since used old work credentials to slip into Amazon headquarters and videotape the invasion for “Rear Entry: An Unauthorized Expedition Into Amazon.com,” which runs on his Web site: www.mikedaisey.com.

And since the recent layoffs, Daisey has also been taping interviews with Amazon ex-staffers, for a possible documentary film.

Interest in “21 Dog Years” is already spreading to other cities. Daisey’s not surprised: “Anywhere people have gone through the dot-com boom and bust thing, they’ll want to see this. The tech sector takes itself very seriously, and there’s not been much artistic commentary about it.”

Though he’s unlikely to get much applause from Bezos and company, Daisey says he can speak freely about his experiences: his “non-disclosure agreement” with the company is just expiring.

But how could he have so much to say after only two years in the Amazon fold? “That’s where my show’s title comes from. If you calculated my time there in puppy-dog years, it works out to be 21. Sometimes feel I should be drawing a pension.”