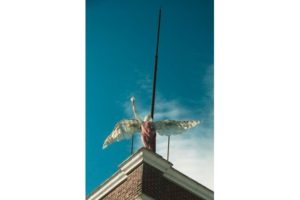 About a year after the fire, Tom and I moved to the building next door to the old Speakeasy Cafe. If we crawled up through our skylight to the roof garden, we could walk right into its burnt out hulk.  It took about a year and a half before the owners of the building where Speakeasy was put plywood on the broken windows.

Half the light that came through those windows seem to have turned black. In the far southwest corner we could see a black pool table shaped thing and the ghosts of walls. Everything was black or gray like the color had been sucked out long ago. But there were birds.

One night there were foot steps on our roof — this wasn’t uncommon. What was unusual was that there were so many footsteps so far on our side of the roof. When I peeked out of the skylight, I could see a ladder leaned up to the roof of the old Speakeasy building and a whole group of people scrambling over the top carrying some kind of diaphanous thing. My puzzled look brought a familiar voice saying ‘Oh, don’t worry about it.’

The next morning, we had the Angel of Belltown.