Finding success as an upstart Internet Service Provider in the early days of the web wasn’t easy. 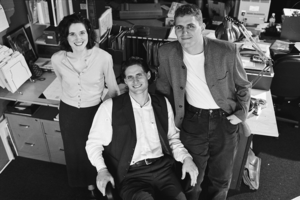 Speakeasy is adept at evolving

In 1993, Mike Apgar and his wife opened a cafe on a whim. He couldn’t have foreseen that it would morph into something quite different: an Internet company with a nationwide reach.

Apgar, chief executive officer of that business, Speakeasy, makes it sound like much of the evolution came about by chance. If that’s the case, Apgar is a lucky man, albeit one who seems to have a knack for reading his customers and the market.

Its nine years in business read like a history of the Internet in microcosm, but its ability to evolve in almost chameleonlike fashion may be one reason Speakeasy has attracted attention and business.

“Knowing this space, they’ll have to evolve based on what users want,” said Mike Wink, an associate with Cornerstone Ventures. “They have a history of doing that and of knowing how and when and why.”

But even investors acknowledge that Speakeasy faces some serious risks. Specifically, the company doesn’t own its own Internet network, but relies on vendors, mainly Covad Communications, to provide high-speed Internet access, which Speakeasy then resells to its customers.

The problem is the entire business of providing broadband Internet access rests on shaky financial ground. So, unless Speakeasy can depend on stable service providers to spread the risk, it stands to see its existence threatened again, as it did last year when Covad filed for bankruptcy protection.

An idea for a cafe

To be in a position where such issues are central shows how different Speakeasy’s business is today than since it was founded. Before broadband existed, Apgar and his wife, Gretchen, came up with a plan to open a cafe in Belltown, then emerging as one of Seattle’s trendiest neighborhoods.

“It was a pipe dream,” said Apgar, 34. “We weren’t all that serious about it. We were young and looking for something cool to do.”

Rather than a simple establishment, they opened an Internet cafe after Mike Apgar first got on the Net and found the experience exciting, yet technically challenging. The idea for the cafe was to give people without much technical know-how or money a chance to experience the Internet.

It quickly grew into a popular neighborhood hangout, with events ranging from live jazz to independent film showings. As awareness of the Internet grew, Speakeasy became a place for people to look for services.

“We became sort of a de facto retail outlet for the Internet,” Apgar said. “People would walk up to the counter and say, ‘I’d like a beer and can someone tell me how to get a Web site?’ ”

Beyond the cafe business, Speakeasy also began building Web sites, constructing one for Virginia Mason Medical Center and Pyramid Brewery — for $100 per site. “We didn’t know what to charge,” Apgar said.

Soon Speakeasy was doing a little bit of everything, from setting up corporate computer networks and offering dial-up Internet services to housing servers in its tiny front office. “We used to call it Das Boot,” Apgar said. “We had 12 people in this small space and there’d be a crisis every few days. And there was no air conditioning. It was just nuts.”

Despite all the activity, Speakeasy didn’t have much to show over the first four years. Its founders were working 12- to 14-hour days, and it grew strictly on the basis of month-to-month cash flow, its only source of capital.

Then Apgar decided to refocus the business on emerging broadband Internet technology. In late 1998, Speakeasy cut a deal with Covad, a digital subscriber line (DSL) operator, so it could in turn sell broadband access. The approach was to ask customers to pay a bit more than the competition, while Speakeasy concentrated on customer service and providing unique options. For example, it launched two services packages aimed at high-end broadband users — one for gamers and another for system administrators.

Outsiders praise Speakeasy’s strategy. “During hard times for other broadband ISPs, they grew because they had focus,” said Pat Hurley, DSL analyst with Tulsa, Okla.-based consulting company TeleChoice. “Their services weren’t the cheapest, but they had things people wanted.”

Apgar estimates that the introduction of DSL services enabled Speakeasy to take in $2 million in revenue in 1999, the year it also began offering the service nationwide.

A year to forget

Then came 2001, a bad year for many businesses, Speakeasy not excepted.

Early in the year, the company sought additional financing. Promising potential investors were in Speakeasy’s office when the Nisqually earthquake hit.

The earthquake turned into a bad omen of sorts. Despite the initial enthusiasm, the group declined to invest.

Then came May 21. It was a Friday night and Apgar and his wife got a phone call: There was a fire at the cafe.

Apgar rushed to the cafe, which by then “was an absolute inferno,” he said.

While popular, the cafe had never been a big money maker so he decided not to rebuild but continued to focus on the ISP business.

Covad’s network never went dark, but it wasn’t until December that SBC Communications completed an investment that pulled Covad out of bankruptcy.

“That was a period where a lot of us aged at an accelerated pace,” Apgar said.

After seeing Speakeasy’s business threatened by overreliance on one vendor, Cornerstone is encouraging the company to spread out risk.

Despite the struggles last year — including Sept. 11 when orders for new service essentially halted — year-over-year revenues grew by 350 percent in 2001 over 2000, said Apgar, though he would not disclose a figure.

Speakeasy isn’t done evolving. “It seems like they’ve been re-inventing themselves again as an ISP that appeals to a broader segment of the public, not just high-end, tech-savvy geek types,” Hurley, the DSL analyst, said.

Offering the Internet to the masses is, ironically, exactly what Apgar set out to do when he originally came up with the idea for the Internet cafe. “This thing is really cool,” he said to his wife after he first experienced the Web, “and this is something more people should have.”