In 1996, it wasn’t hard to dub your event ‘the largest collaborative Internet event ever,’ but even by today’s standards, 24 Hours in Cyberspace was an impressive undertaking. Thousands of photographers around the world photographed folks as they were using the Internet, with the goal of showing how this developing technology was impacting peoples’ lives. 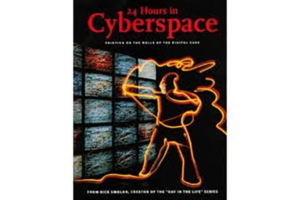 After all was said, done and digitally transmitted, the impact of yesterday’s ambitious “24 Hours in Cyberspace” project came down to a simple proposition:

Cyberspace and the real world are no longer separate entities.

The project involved dispatching 150 photojournalists to more than 500 sites around the globe, including Seattle, to take pictures of people who not only have real lives, but spend significant parts of them on the Internet. The result: Project director Rick Smolan and his Against All Odds crew documented a richness of human sharing once deemed inconceivable for anything related to technology.

“This way exceeded any of our wildest dreams in terms of energy, enthusiasm, global recognition and human understanding,” Smolan said from his San Francisco “mission control.” There, the crew processed the photos and text with the help of more than 50 high-powered workstation computers collectively containing enough memory to power nearly 1,400 standard desktop computers.

Subjects of the documentary, including more than a dozen “virtual school” students gathered at the Speakeasy Cafe in Seattle’s Belltown area, readily agreed with Smolan.

“It’s really neat to be part of the project,” said Hanna Chung, 12, of the Puget Sound Community School, which also meets at least once weekly in a virtual classroom online.

“This will help people understand what the Internet is all about,” said Chung, who spends 15 minutes to three hours a day on the Internet, including weekends. Like most students at the alternative school, Chung taught herself to program World Wide Web pages and perform other Internet activities. The Internet, she said, is like her “other home.”

“Most of the kids know more about the Internet than I do,” said Andy Smallman, who founded the school two years ago, in part to provide students with a new model of education where they’re part of the community. Students in the program are treated as home-schoolers by the state and must take the GED to be certified.

The only “dark side” to the day came when President Clinton signed the Communications Decency Act, part of sweeping telecommunications legislation, into law. Around the nation, thousands of Web home pages blackened their screen backgrounds or posted blue ribbons in protest of the legislation, which aims to curb pornographic and offensive material on the Internet. Cyberspace’s defenders say the legislation flouts free speech and is impractical because much of the Internet lies beyond American jurisdiction.

The Justice Department yesterday pledged not to initiate prosecutions for a week, and a federal judge, in a challenge brought by civil-rights groups, declined to temporarily block the Decency Act, giving prosecutors until Wednesday to submit written legal arguments.

Smolan decided to keep the “24 Hours” Web home page’s white background. Because the page was intended to have a certain look, he said he did not want to tamper with it at the last minute. The “black armband” protest was organized just this week.

At the “24 Hours” project’s mission control, the first photographs were digitally received from Australia and loaded on to the Web site at 7:40 a.m. yesterday. A collective “sigh of relief” escaped from dozens of the staffers who were up all night.

“It was like the first steps of landing on the moon,” said Patti Richards, a media coordinator.

Gradually, the images started filtering in from other parts of the globe, including Africa, Eastern Europe, South America and Japan.

In Seattle, photographer Natalie Fobes was up at 6 a.m. to shoot Glenn Fleishman, an Internet wizard who in 1994 co-founded one of the first Web businesses – providing sites on the Internet for companies, institutions and others.

Then it was off to Renton to portray Lisa Stevens, founder of the wildly popular Wizards card company, and Vic Wertz. The two met on an Indigo Girls discussion group and later married.

“We’re really trying to capture how the Internet has changed people’s lives, and that’s hard to do,” said Fobes, a former National Geographic and Seattle Times photographer. “We’ve all heard about how kids are learning from others in Brazil or Australia or London. It’s a challenge to illustrate that on film.”

Other local subjects photographed were Paul Allen’s online venture Starwave, Microsoft’s virtual worlds chat program, an Olympia-area veteran of the Bosnia conflict whose missing foot was replicated by a physician through e-mail contacts, and an Evergreen State College program for the disabled. They were photographed by Roger Ressmeyer of the Bill Gates multimedia company Corbis and Steve Ringman of The Seattle Times.

For a parallel student-photojournalism project, contributors at the University of Washington and Henry M. Jackson High School in Mill Creek uploaded images to the 24-hour page. And thousands of “cybercitizens” around the globe were encouraged to make their own contributions.

Some photojournalists used digital cameras, whose images can be transmitted electronically. Most used conventional cameras and film, which is converted to digital form by a scanner.

The page was originally scheduled to shut down at midnight. But Smolan decided to extend it for a day or two.

By mid-March, Against All Odds will issue a CD-ROM and the more conventional coffee-table book documenting the cyberspace effort.