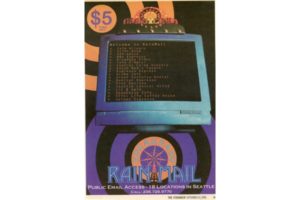 When I moved to Seattle in early 1996, I lived in a warehouse space in the U District, down the street from Cafe Allegro.

At the time, the Speakeasy had RAIN Mail terminals at the Allegro, among other places, with which you could get a shell account and explore the early Internet through e-mail and a Unix prompt.

Even though there were no graphics, and the most you could really experience were newsgroups and instantaneous mail that didn’t have to be delivered physically, to me this was like science fiction.

I didn’t grow up with a computer in my house, and the public at large had only just begun to hear the words ‘Internet’ and ‘World Wide Web’ about three years earlier at the most, so I felt like I hadn’t just moved from the Midwest to the West Coast, I felt like I’d somehow moved to The Future.

Within two years, though, even my grandma was forwarding the same chain e-mails and stupid jokes I’d already seen a thousand times, but still.