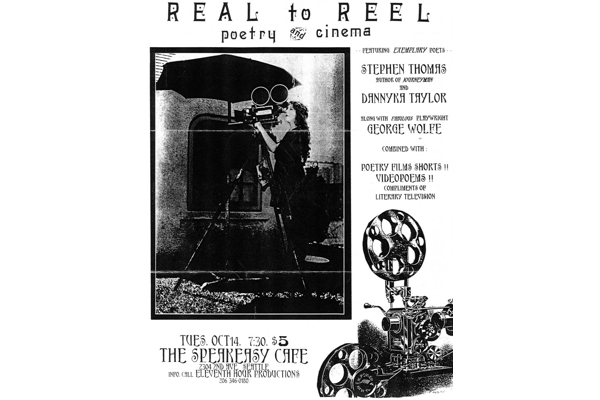 One of the ways that Speakeasy connected with the arts community in Seattle was to provide a space for smaller production companies to screen films.

Last night was just another Ambient Night at the Speakeasy Cafe. For some months, on every Wednesday Starseed Productions has run this special showcase: a combination of conversation by candlelight and live “chill-out sounds” floating over computer terminals.

But this was the final Ambient Evening, a sad occasion for the group of devoted regulars: artists, ravers, cyber-networkers – and some interested street people. Yet, for the same crowd, something new is happening, an increasing focus on film and video showings. Even yesterday, from 7 to 10 p.m. in the “back room,” there was a special night of shorts, presented by the rock promoters Tasty Shows.

These included skateboarders flying through Manhattan to the sounds of John Coltrane, documentaries on strange cults, and youthful artists (from graffiti purveyors to the tale of a single suit). As an adjunct to the five sets of moving images, there is a found-art show called “Lost Animal Flyers.” Its curator, the New Yorker Erik Brunetti, has collected 70 different examples, each a call for some beloved pet.

This is a package Tasty Shows brought from New York, through Paper magazine and the OK Harris Gallery. Says Tasty’s Jason Ellis, “It’s a real departure for us.” But it shows which way the trends are blowing: toward more recognition of local arts such as animation, film, computer graphics and video.

The attention started shifting late last summer, when the New York-based AIVF (Association of Independent Video and Film-makers) dedicated the fall issue of its magazine, The Independent, to the Northwest. AIVF hosts monthly film salons in 14 cities, and when The Independent’s publisher visited here, she was feted by media activists.

One of these included local Joel S. Bachar, founder of the five-year old company Blackchair Productions. Bachar, who has been described as a “videographer,” asked Lerner how he could start a salon in Seattle. Last Dec. 12 saw his first attempt, which drew more than 40 people to the Alibi Room. The agenda, attendees found, was open, embracing Super-8 and software as well as features.

Says Bachar: “I really didn’t want to dominate. As much as I love movies, I hate film fascism. I can’t stand it when people cringe at the v-word: video.”

Tonight, at the Speakeasy, Blackchair hosts its monthly showcase, an event it calls Independent Exposure. Independent Exposure has run for more than a year, a curated screening program for local, national and international shorts. Once again, it embraces everything from documentaries to animation and “ambient footage.”

Tonight’s showings are both world premieres, and each will have its director in attendance. One of these is Chicago film-maker Jennifer Reeder, who will introduce the latest episode of her series “White Trash Girl.” It will be shown with a piece by Rossana Jerran, founder of Kansas City’s Gothic Productions. Jerran’s work is “M(Other)”; she calls it a “dark study of maternal archetypes.”

Filmmaker Sandy Cioffi both produces and directs; currently, she is in post-production on “Terminal 187,” a 30-minute film made through the Langston Hughes Cultural Arts Center. She will be in the audience this evening, and says she supports efforts like the salons. “I’m really glad they’re there. For Super-8 or for video art, there’s no better place. It’s when you get more ambitious it’s difficult. I could name six local features now shooting. But they’re all personally-funded and all struggling.”

Salons, more exposure and networking, says Cioffi, may help to encourage a change in that climate.

“Too many mid-career filmmakers leave town. Sure, it’s great to be young, to create here. But to make our film culture really work, we need absolutely solid economics. To make it sustaining: that’s what we’ve got to address.”

Tonight’s showing of Independent Exposure begins at the Speakeasy Cafe, 2304 Second Ave., at 7 p.m.; suggested donations are $4. “Lost Animal Flyers” remains up tonight. The next Seattle film salon is Feb. 11, in the basement of the Alibi Room, 85 Pike St. Blackchair Productions’ Web site is http://www. speakeasy.org/blackchair/, and includes directions for any film submissions.