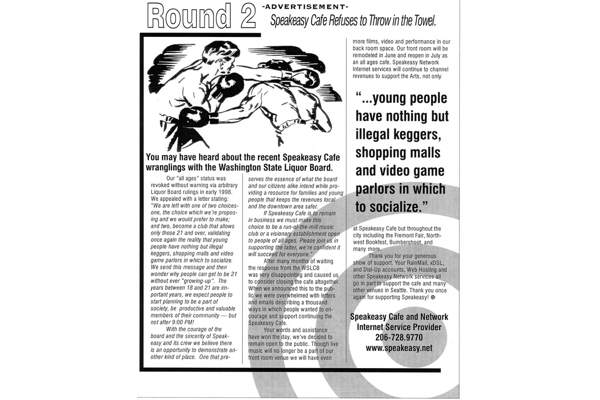 The Speakeasy Cafe had become a popular destination in the area, particularly for all-age fans of independent jazz. The atmosphere on the weekend nights was electric, and folks could enjoy free music while drinking coffee, surfing the ‘net, sipping on a beer or enjoying any of the cafe’s delicious food.

But like all halcyon days, these had to end; for much of the first half of 1999, the cafe was under pressure by the Washington State Liquor Control Board (WSLCB) to change its practices. They questioned the cafe’s business classification and whether or not they could host all-ages events, and while one rep would sign off on the cafe’s practices, another would follow behind and quickly negate the ruling.

While the cafe staff was committed to serving alcohol to folks only 21 and over, there was a political movement working within both city and state government to effectively minimize the all-ages music scene in the city. Unfortunately, the Speakeasy was caught in its crosshairs. From 1985 – 2002, the city’s Teen Dance Ordinance was in effect, which while it was aimed at keeping kids safe, had the ultimate affect of rendering all-ages venues in the city basically unviable. In addition to being cited for often conflicting infractions by the WSLCB, the Speakeasy was also being pressured by the city under this ordinance, simply because it hosted live music.

After months of contending with officials, the writing was on the wall: If the Speakeasy continued to host music, they could only do so for audiences 21 and over. This ultimately brought into question whether or not the Cafe could survive as a 21 and over venue — the music it offered and the audiences it brought in on the weekend accounted for much of its revenue. After struggling with the decision, the Apgars announced to the community that they would no longer be able to run the cafe — to which they received an outpouring of support.

In response, they shut down the cafe for a few months, engaged in a large scale remodel and reopened it again in June of 1999. While they had to limit music events to 21 and over audiences from then on, the cafe still functioned as a de facto community hub for the next few years.