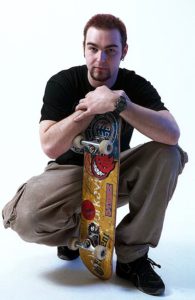 I started off on the sales team. I wasn’t the best sales person on the team, however, I was good at process and lots of the sales guys weren’t. I found a few of things that they hated dealing with because they took too much time, and offered to deal with them for them, so they could just transfer them over to me and I would take care of it. This saved them from calls that they deemed to be a ‘time suck.’

One of these things was ISP switches — someone had waited 4-6 weeks to have their DSL installed, and now they wanted a new DSL provider, but they didn’t want to wait 4-6 weeks again, especially if it meant 4-6 weeks without their new found addiction that was high speed Internet! I realized that I could answer some basic questions, assure them we could do this with minimal downtime, and from there it was collect information as fast as possible and get off the phone. This allowed me to spend most of my time processing orders rather than trying to convince people to order, making me one of the top sales reps every month with minimal effort.

When the dotcom bubble started to burst around 2000, the volume of ISP switches started to pick up. Mike Apgar showed up and asked the sales team lead about the ISP switch process and how it worked. He redirected Mike to me saying, ‘I don’t know, Jake does pretty much all of them currently.’ Mike and I went to the big con room and talked through how we could do 10x and 100x the number of ISP switches per month.

We left the room 1.5 hours later with a list of requirements to make this happen, some team suggestions and shell of a plan. Two days later there was a meeting with most of people we had discussed for the team, and we spent a couple hours further refining the vision for how this was going to work. We added more people to the team list with various specialties and the excitement continued to build.

Fast forward many months, lots of long hours and industry consolidation and the plan went exactly as outlined … well not really, but it was successful.