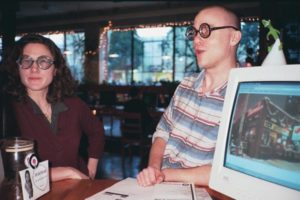 At some point during my tenure as a barista, I became the curator of the cafe’s music selection. It was my job to buy CDs for the fifty-disc CD changer that served as a primitive iPod, providing the musical backdrop for caffeinated web browsing.

We also had a deal going with Wall of Sound, the record store across the street, where they’d lend us five discs at a time in exchange for free website hosting.

With each new crop of purchased or loaned CDs, I’d write reviews of the music and send them out to the entire Speakeasy staff under the moniker ‘Big Mouth.’ These were eventually collected in a sort of proto-blog on the Speakeasy’s website.

Somehow this developed into me becoming the guy who booked all the music and theater under the moniker ‘Juakeem.’ I didn’t want people coming up to me and bugging me about booking their band while I was trying to work, so I insisted that the staff say ‘I’ll put this in Juakeem’s Box,’ whenever someone gave them a demo or something. This led to exchanges such as the following: